I have always maintained that most men have at least one (and probably only one) "tournament" fighting anime in them. I am sure that the Japanese have a name for this sort of anime, where basically almost every single episode really centers on a fight between our protagonist and his enemies (or are they?). The story arc of these series involve out hero getting stuck in some sort of tournament where they have to defeat a sequence of lower baddies in order to face the big bad guy who is .... You get the idea.

This genre of anime is extremely repetitive. This genre is repetitive. Repetitive. Often a single fight pairing will take up the entire episode. A tournament will often involve 20 or so of these sequential fights. At the end of the tournament, our hero will usually either discover that this whole fight was just a scam for some even larger tournament he will have to fight in; wash cycle repeat. Over and over.

Oh, did I mention the monologues? This genre of anime absolutely-freaking-loves their monologues. People will stop a fight to give 3 or 4 minutes of verbal exchanges. Each contestant daring the other. Revealing some tiny (and usually insignificant) detail of the heroes quest. Baiting the hero with some hint about where the princess is hidden. You get the idea. If Shakespear were alive today, he would shake his head and walk away at the length and pacing of some of these monologues. Hamlet, long winded? My friend, he was an amateur.

You might think this repetition and wordiness would mean this genre is unpopular; you would be so very mistaken. It is fantastically popular with teenage boys and young men. I couldn't really put my finger on exactly what these series are tapping, but it is something primal, almost hypnotic in its repetition. It has something to do with a desire to be challenged, to prove yourself to others. I think it may have something to do with the young mans wish that there was a formal way of defining yourself as an adult. It is part of adulthood (at least in modern culture) to realize that there is no "rite of passage" or "trial by fire" to becoming an adult. You become an adult through a gradual process of accepting more responsibilities, not because some villain stole your childhood sweetheart and now you need to gather your friends and go save her. Sad but true.

Most people in the West think of Dragon Ball Z as the classic fighting anime. It's 7 year ~300 episode run attest to just how popular this series was. It was a bit before my time so I never watched it. For myself, I was weened on Flame of Recca. I thought it was soooooo coooool. I remember going on #animefiends and #animesync (IRC) and downloading the newest fansubbed episodes every week. I waited with batted breath for those episodes to download off our families slow internet connection. While waiting for the broadcast and subsequent fansub every week, I would sometimes imagine what the next episode would be about. I don't even remember a whole lot about the series anymore, but I remember that I was obsessed about it at the time. I think most men (into anime) experience something like this at least once. Later in my life, as I attended university, everyone around me got into Fullmetal Alchemist and Bleach. This was interesting to me, as I had already experienced a tournament fighting anime and was effectively immune to them. I just couldn't get into them as I would have been able to had I never experienced them before. It is like Chicken Pox, once you have had it you probably won't get it again.

Ok, enough amateur psychology and history. How was Kill la Kill? In a word... Excellent.

As I said in the beginning, I think every man can get excited at least one time over a tournament fighting series. Most men will experience it once, get incredibly excited about it, eat sleep and dream it, and then slowly but surely move on. Future "tournament" anime series will just not be attractive to them in the same way that their first one was. Eventually, you accept that these sort of series are in fact juvenile. As you get older, the desire for easy answers and clear rites fades, life is nuanced and more complex than that.

And then Kill la Kill comes along. Kill la Kill repackages the excitement you experienced with your first tournament series. Tongue firmly in cheek, it turns the dial on this genres attribute to 11. Clearly aware of the ludicrousness and naive simplicity of its inspirational material, it pokes fun at it every chance it gets. To my mind, Kill la Kill would actually make less sense if you have not seen a tournament fighting anime before. It's plot is ridiculous, it just roles with it. Overly talkative characters, other characters comment on monologuing. It pushes the boundaries but never actually breaks the fourth wall. Even the fan service is done in a way that pokes fun at the obsessive amount of fan service in anime, while embracing it completely.

Simply put, this is a great anime to watch after you have already experienced on genuine "tournament" anime series. It deconstructs everything that you though was so honest and important in these original series, but does so with such good nature and humor that you don't actually mind. 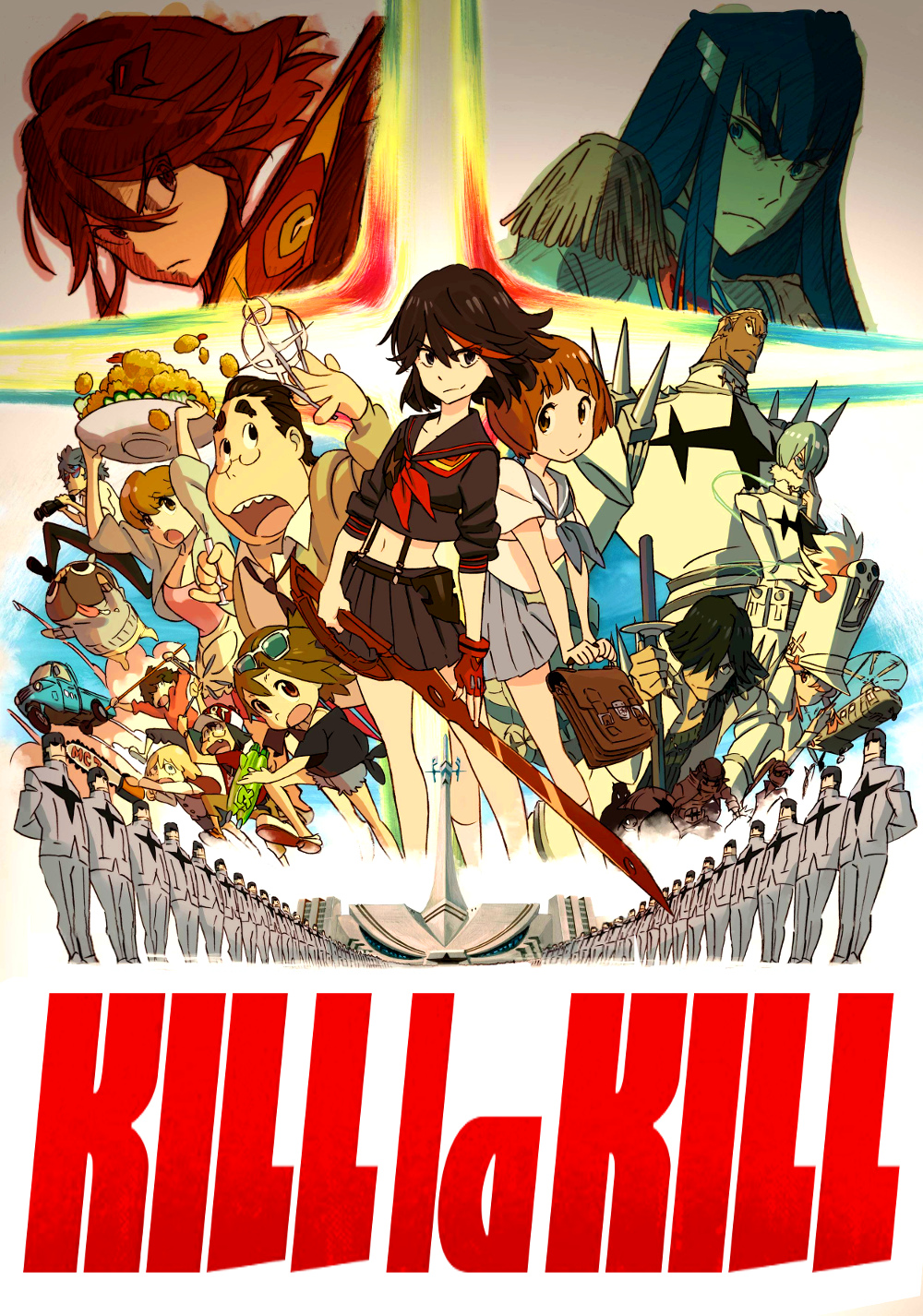